When to Contact a Lawyer About an Insurance Claim? After or Before your claim is denied ? 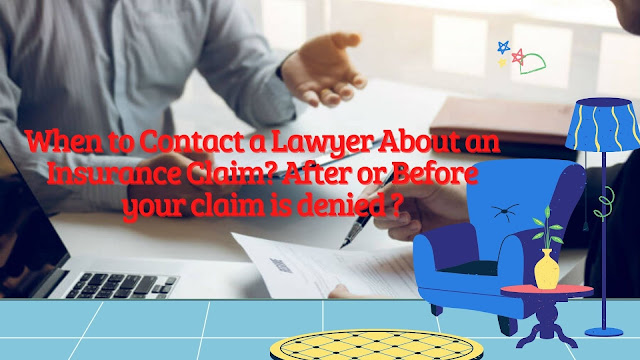 You’ve suffered a major loss from fire, theft, or some other calamity and you’ve filed an insurance claim. You’re not sure what your rights are, and you’re worried about trusting your insurance company. You should be. Your financial interests and your insurance company’s financial interests are in a natural conflict – You want a maximum payout, your insurer a minimum. An insurance claim is a business negotiation, pure and simple. So although you paid good money for coverage and good claim service, you may have to fight for it. And you may need professional help in that fight. In an ideal world no one would need to hire a lawyer to get an insurance claim paid on time and in full, but in this world, many do.

When to Contact a Lawyer About an Insurance Claim

Should you contact a lawyer to discuss your insurance claim? Small run-of-the-mill claims usually settle without trouble. But in cases where there’s more at stake—for both you and the insurance company—there may be a higher chance for dispute. This could include:

·       Large claims, such as house damage after a fire, extensive water problem or tornado

·       Claims where fault is hard to establish

If you have one of these claims, you’re more likely to need legal help. “If you believe you have an insurance claim, it is always better to contact a lawyer before you speak with any insurance representative,” says Allen Patatanyan, co-founder of West Coast Trial Lawyers in Los Angeles. “Consulting with a lawyer for a potential insurance claim should be free, so there is no downside in receiving some sound legal advice before you move forward.”

Speaking with an experienced lawyer before you contact your insurance company to make a claim can help you avoid hurting your case when you communicate with experienced insurance representatives when you open a claim, he adds.

“Remember this,” he adds. “Insurance companies are all about making money by finding reasons or excuses to deny your claim and avoid paying you insurance benefits. And this starts from your initial call to open a claim.”

Others say you should only turn to a lawyer if it’s a complicated claim with a high dollar value.

“If your claim is not a simple one and may involve interpretation of the policy, it is sometimes best to consult an attorney,” says Pamella Seay, who teaches justice studies at Florida Gulf Coast University. “Some attorneys may provide you with a review to give you some guidelines on what to do on your own, though most will not. If the amount is significant, engaging an attorney for a review and a letter may be reasonable. Otherwise, the cost of an attorney may be more than the claim itself.” (A lawyer letter is a demand letter sent by an attorney and a possible precursor to legal action.)

Even the insurance industry recommends a lawyer—to a certain point.

The Insurance Information Institute, an industry-funded trade group, issued a statement on how the claims process works. A troubleshooting tip on the list for difficult claims is “consult an attorney,” although it’s quick to add that the American Bar Association notes “many legal matters can be handled by consumers on their own, without a lawyer.”

Another good strategy for a large claim is hiring a public insurance adjuster. For example, after extensive home damage a public adjuster can work with you to get paperwork done, meet deadlines and advocate for you.

Can a Lawyer Help After Your Insurance Claim is Denied?

If you have to ask that question, it might already be too late, according to Brian Page, an associate attorney at Stewart J. Guss, a law firm specializing in injury accidents.

“If an insurance company denies your claim, it is unlikely they will change their position unless new evidence is presented,” he says. “This is why I generally recommend getting an attorney ahead of time, so you have the highest chance of having the claim approved from the start.”

However, if you’ve already had a claim denied, an attorney can help. An experienced lawyer can see the claim from all sides and know if there is any chance of getting the insurance company to reverse its position.

Appealing a denial isn’t a matter of filling out a few forms or writing a lawyer letter to the insurance company.

“Often the process involves the exchange of information–referred to as discovery–legal filing deadlines, settlement negotiations and, quite possibly, a lawsuit,” says Stephen Riebling of Riebling & Payton, a law firm in New York state specializing in criminal defense.

Does Hiring a Lawyer Boost Your Chances of Success?

“Hiring a lawyer most definitely helps your chance of success,” says Sally Morin, a personal injury lawyer in California.

Why? An experienced lawyer will ask you a series of questions to evaluate your claim to determine if it is even worth pursuing. If you have a case, a lawyer will use their expertise to push your claim along.

“Insurance companies use a couple of tactics with people who are not represented by attorneys,” she explains. “If they know there is a valid claim, they will make a quick low offer in hopes that you take the money and run. If they know it’s going to take you some real work to prove your claim, they will straight-up deny it and hope that you just walk away. And frankly, many people will walk away. That’s what the insurance companies bank on.”

And that’s why hiring an attorney can improve your odds.

Ryan Babcock, an attorney with the Babcock Law Firm, a personal injury law firm in Georgia, says lawyers are sometimes necessary to overcome the insurance industry’s practices in dealing with claims.

“They deny, delay, and deflect legitimate claims by regular people, rather than adjust such claims fairly and quickly, as they should do,” he explains. “Many cases are too complicated to handle on your own, and hiring a lawyer is the best approach to handle the problem.”

Is a Lawyer Worth It?

Sometimes, attorneys will take an insurance claim case on contingency. That’s where you don’t pay unless the attorney wins your case. Standard attorney’s fees are usually 33% of the recovered amount if it’s resolved before a lawsuit is filed and 40% once litigation begins. For a smaller case, you might be able to file a successful claim or appeal with a lawyer letter, which could cost as little as a few hundred dollars.

Tina Willis, a personal injury lawyer in Orlando, Florida, says determining the value of an attorney is a simple numbers game. Often, insurance companies agree to settle a claim without being specific about the settlement amount. And that is—often literally—the million-dollar question.

“Because they can accept liability, yet still pay $10,000 on a claim worth hundreds of thousands, or even a few million dollars in extreme cases,” she says. “Insurance adjusters are well-trained to use tactics to lower claim value when paying. Those include asking innocent sounding questions to gather information that ultimately hurts the person’s case, or closing the claim long before all medical bills, and necessary medical treatment, or lost wages, or pain and suffering, are even known.”

“Hire an attorney before a final decision is issued by the insurance company,” he says. “That is because once the mandatory appeal process has been completed, the only review available is filing a lawsuit in federal court.”

Barring an exception, federal court review is limited to the claim file created through the administrative appeal process. That means you can’t add any new evidence.

Posting Komentar untuk "When to Contact a Lawyer About an Insurance Claim? After or Before your claim is denied ?"